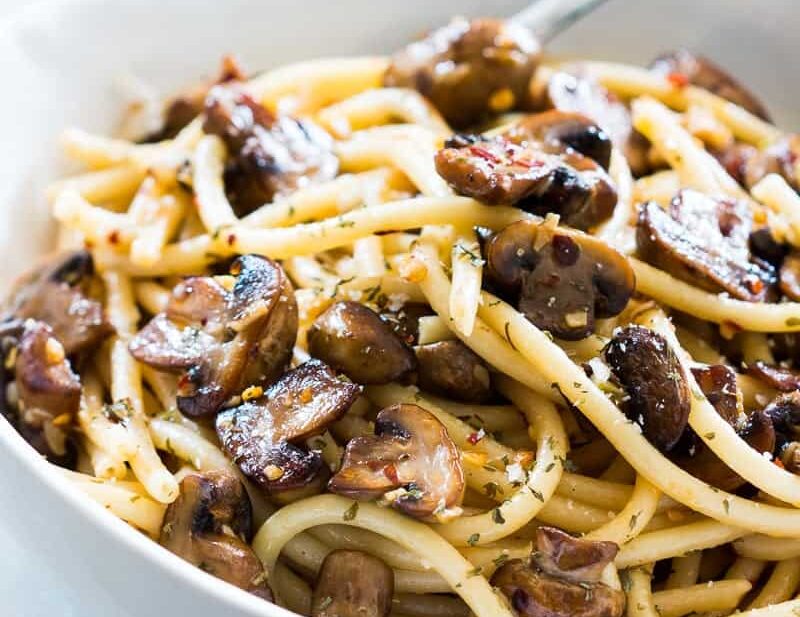 An easy 15 minute recipe for lazy nights when you crave some pasta goodness which comes through best in spaghetti! This Mushroom Spaghetti Aglio Olio is a really quick and comforting meal involving really less ingredients. Its perfect for meatless weeknights!

Just letting you in on a secret - we end up doing an aglio olio pasta at least once a week. It's our lazy dinner night when we don't really want to do any chopping or too much cooking and would much rather spend that time slouching on the couch in our pyjamas and watching Netflix. Are you with me?

We are such pros at spaghetti aglio olio now that these days it's all about variations. The classic aglio olio does make an appearance once in awhile, but let's see what else we can do with it. Enter Bacon Spaghetti Aglio Olio which is still my favorite but currently topping the charts has to be this Mushroom Spaghetti Aglio Olio. I even have a super quick video to show you how to make this

We always have spaghetti in the kitchen cupboard, obviously. We are a carb loving family. And there is nothing to this recipe except spaghetti, good quality extra virgin olive oil, some parsley (dried or fresh) and chilli flakes. Which is why it's so easy to do variations! We recently did a Goan Chorizo Sausage version which was mind blowing (coming up soon).

The aglio olio, any version of it, is really Denver's favorite, which is why I love making it so often. I think he's a secret gourmand who loves the finer things in life. Unlike me who is mostly a glutton and will stuff her face with anything, any time of the day.

But seriously guys, this one's perfect for nights when all you want to do is slouch and watch. Who's with me here?

This post was first published on September 13, 2016 and updated on August 4, 2021 with a new recipe video and some changes to the recipe to improve it 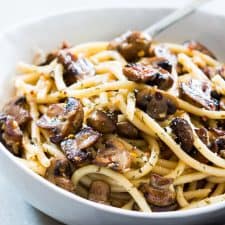