Garam Masala is the king of Indian spice mixes, and every house should have a jar of this fragrant, complex spice blend. Used in a number Indian recipes, gravies and sabzi’s, a little goes a long way

Garam Masala is the quintessential Indian spice mix or blend that adds that hit of flavour to Indian cooking. It's really easy to make at home and I make a batch once a year. Homemade garam masala is definitely more fragrant, and more potent than store bought.

With garam masala, different families, different regions have different versions. And this is mine. This is how my mum and grandma have been making it for years.

What does Garam masala mean

Garam in Hindi means “hot” or “warm”. Masala just refers to any blend of spices. With Garam Masala, everyone either follows generational family recipes or buys one of the many brands available in markets.

Most likely, make than buy because there is nothing like homemade garam masala and it’s so simple, you’d wonder why you’d ever buy it.

Each region has its own fun spin on it. The punjabi garam masala is mild and mostly aromatic. It provides warmth. It was created to combat the harsh cold winters of North India - a recipe born from necessity. Black pepper serves as the only hot spice present in it amongst several sweet ones. This makes the blend pungent rather than spicy. Some North Indian recipes even find use of star anise.

Travelling south, we find that the blend features red chillies that provide heat to the mixture.

How to make Garam Masala

Sundry the spices for a day or two. To sundry, spread them out on a large plate and cover them with a muslin cloth or a net to prevent dust or insects from coming in contact with the spices. Alternatively, you can also microwave them for 30 seconds. The purpose is to get rid of any moisture and not to roast or cook them

Finally, grind the spices to a smooth powder using the dry jar of a mixture grinder or a coffee grinder

Unlike a lot of other recipes, I don’t roast the spices before blending them into Garam Masala. I let them sun dry for a day to get rid of any moisture. Or microwave them for 30 seconds. And then grind them to a fine powder. Roasting releases oils in spices and I would rather the oil stays intact, so that it’s released when it’s added to a hot dish. This is really a personal preference and how I’ve seen generations of women make Garam Masala in my family.

You can grind Garam Masala in the small jar of a mixer grinder, or use a coffee grinder.

However, Curry Powder is not a traditional Indian spice blend but rather an invention of British times.  Most people in India don’t even use it in their cooking, though we have a few recipes on the blog that do, because we love its flavour and aroma. It is a standard mix of spices such as Fenugreek, Turmeric, Cumin, and Coriander. This blend is used to evoke the essence of a Curry. The main ingredient is Turmeric which gives Curry Powder its signature yellow colour. Overall its mild in flavour and is generally used in the beginning of the cooking process.

In contrast, Garam Masala is a traditional spice that has Indian origins. It is authentic to Indian cuisines and has no set recipes. It differs from region to region. Moreover, Garam Masala is mostly used towards the end of a cook.

Why make your own at home

How to Store for longer life

Store in an airtight container to prevent it from losing its wonderful aroma. It is best kept in a dark cupboard so that light cannot penetrate the spices, which helps them retain their taste longer. Refrigerating is not a good idea as the masala can come in contact with moisture, which can cause them to spoil faster. Just remember to store in airtight jars, away from sunlight, in a cool and dry place.

How to use Garam Masala

It isn’t surprising to find out that Garam Masala has medicinal properties. It is full of antioxidants that help keep your skin clear. It also helps with nausea, bloating and digestion. The individual spices that make up the fine blend are amazingly beneficial themselves. For example:

Garam Masala takes very little effort to make at home, and it's really a must have if you love Indian cooking. Always remember, a little goes a long way. The rule of thumb is to use ¼ to ½ teaspoon in a dish that serves four people. I hope you’ll make a jar every year, and find uses for it! 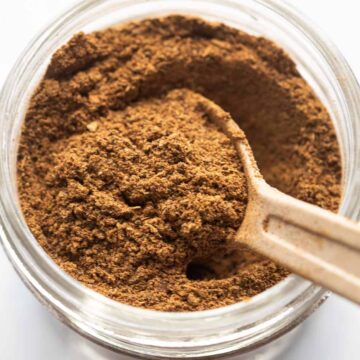 How to make Garam Masala

Garam Masala is a fragrant, aromatic Indian spice blend that's really easy to make at home once you have all the spices with you. A jar will last you an entire year!
5 from 3 votes
Print Pin Rate
Course: How To
Cuisine: Indian
Diet: Vegan, Vegetarian
Prep Time: 10 minutes
Total Time: 10 minutes
Servings: 100 servings
Calories: 7kcal
Author: Richa