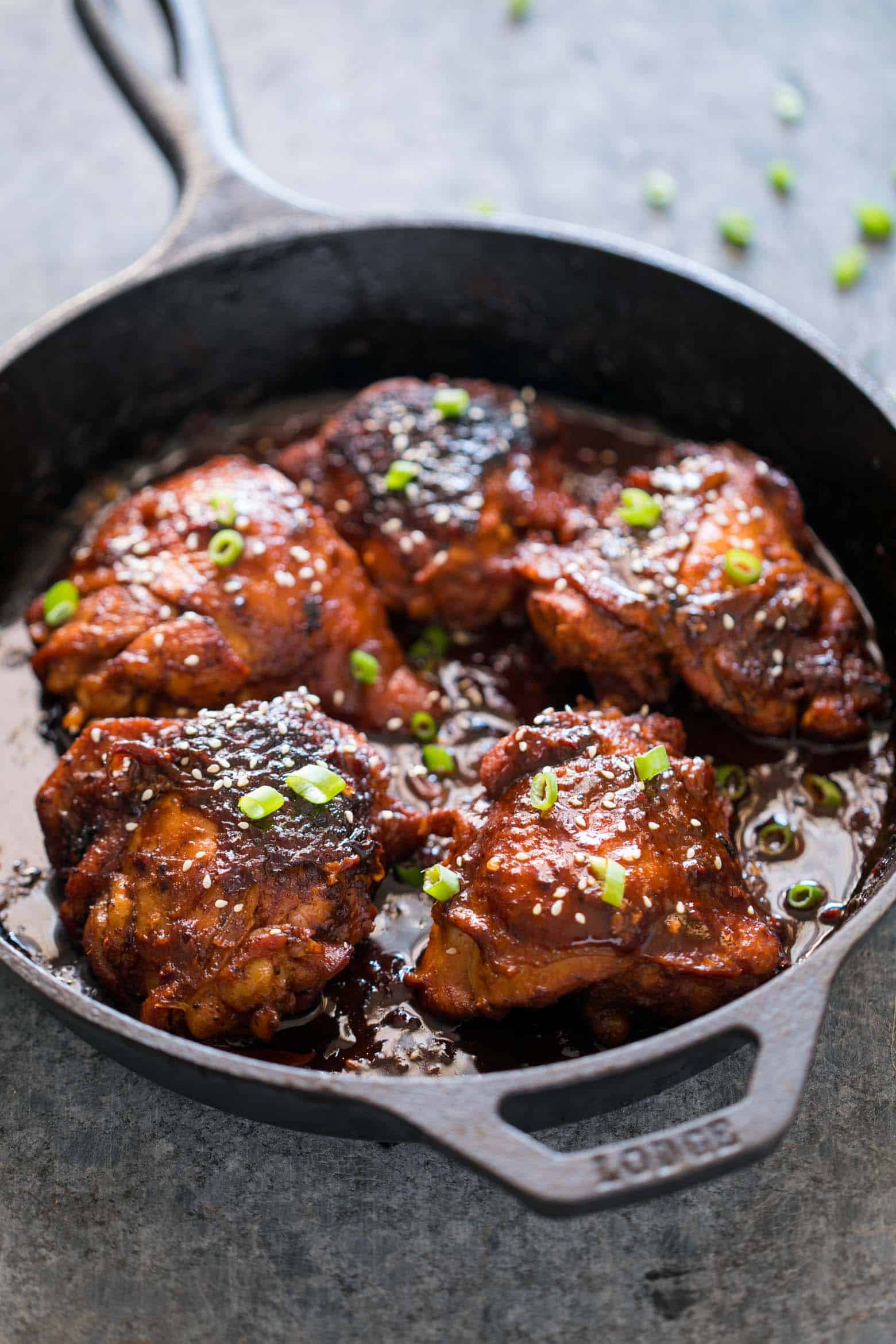 I clearly have a strong love for Korean food. Because this is my third Korean inspired recipe in six months and there are a half dozen others that haven’t even made it to this little food blog. Give me anything spicy with flavors that make you go – that is amazing but I can’t really pinpoint where that exact taste comes from and I’m sold!

I also love how I can always make a Korean inspired meal at home with just a few ingredients. I always have a tub of Gochujang lying around, some soy sauce, a little honey, ginger, garlic and chilli flakes for extra spicaayy and we are so sorted.

If you follow me on Instagram stories, you know I had a little kitchen disaster with these spicy Korean chicken thighs the other day. The entire pan of chicken just flew out of my hand and all over the kitchen. Not a pretty sight. And a wasted dinner. Which is why this recipe is actually making it to the blog two days later than it should have. Because I had to make it all over again! 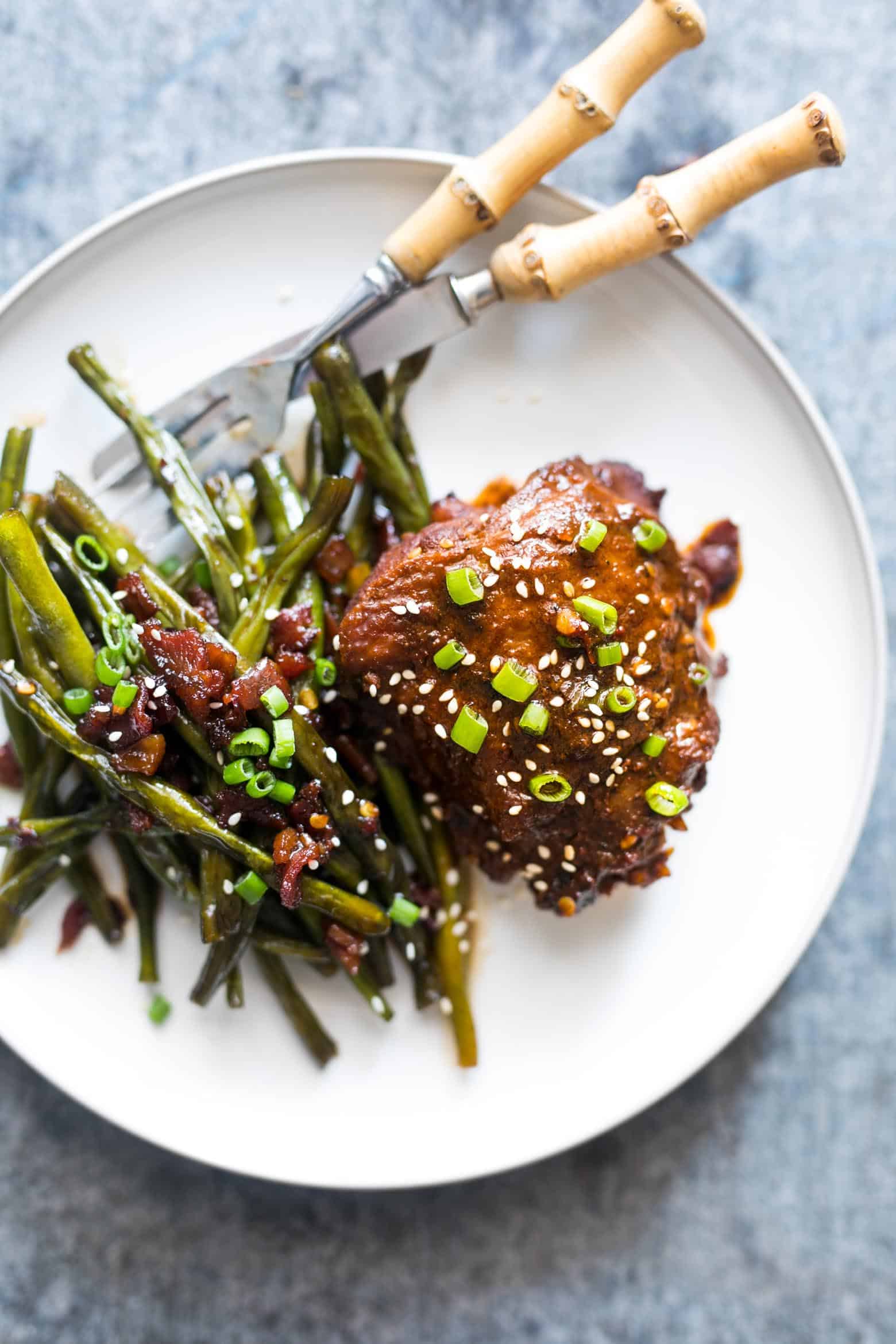 Not complaining because this recipe is insanely easy. You just throw in all those ingredients to make a marinade you’ll want to lick off your fingers, dunk the chicken in, leave it overnight and then in goes everything in your cast iron pan.

We obviously served this with those candies bacon green beans I posted last week because the combination is so irresistible. And you get some veggies in while you are at it, tossed in bacon of course. Yes it was an indulgent weekend.

But these spicy Korean chicken thighs are actually quite healthy. Most recipes will ask you to add a bucket load of brown sugar but I always love the taste of natural honey. These spicy Korean chicken thighs have a slightly barbecue like feel. Because the sauce has a sticky sweetness and it coats the chicken evenly. And when you make this in a cast iron pan, the skin of the chicken thighs gets crispy while the chicken stays nice and juicy. Just like a barbecue and this recipe makes enough pan sauce for you to be able to drizzle some over your rice if that’s what you are having this with. 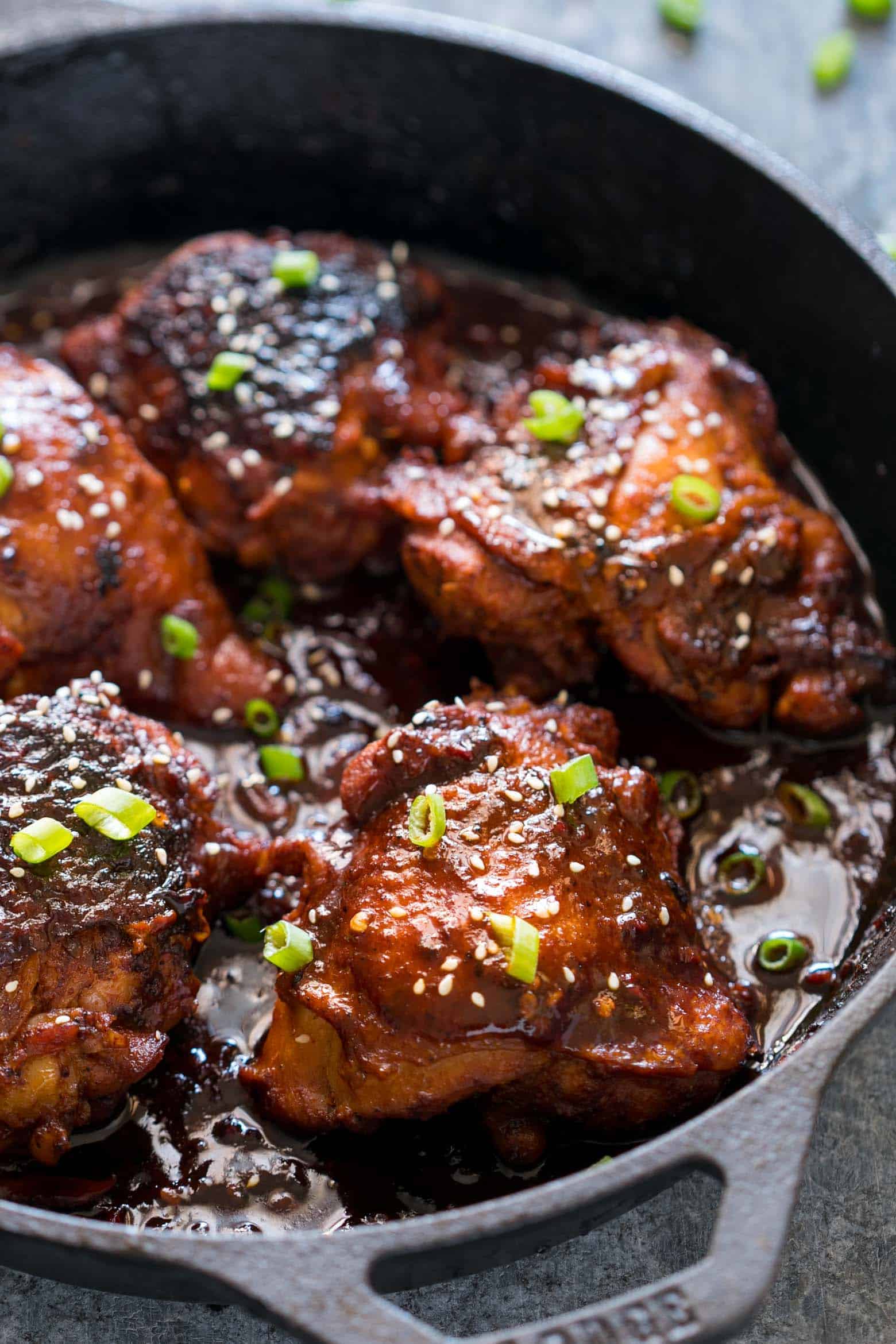 Before we go away, let’s go over the nerdy details of Korean flavours.

What is Gochujang in these spicy Korean Chicken Thighs?

Gochujang is a hot pepper paste which is sweet, spicy and has a fermented taste that it gets from red chili, rice, fermented soybeans and salt. It can be quite hot but it adds volumes in terms of flavor to a recipe. You don’t need to cook it and it can be easily used as a topping if you are making say a Korean Chicken Bowl. A tub of Gochujang can last you a few months and it can be used a substitute for a hot sauce in other recipes too.

What can I serve with these Korean Chicken Thighs?

I love serving Korean Chicken with rice or noodles because those can wrap up all that spicy sauce. But this time we served them with candies bacon beans to avoid loading up on carbs. And because those beans are amazing!

I’ve seen recipes using pear as a marinade for Korean Chicken but you don’t add that?

There are some fruits like pears that can help tenderize the meat which is why you’ll see Asian Pears being used in recipes. But since we are making chicken and marinating this overnight, I didn’t feel the need to use pear and wanted the ingredient list to be short and simple.

Is this marinade similar to a Korean BBQ sauce?

Yes, very similar! You can expect the same flavors when you use this marinade.

Guys, bust out that cast iron pan that’s been lying around and definitely try this recipe! You’ll be amazed at the amount of flavor that only seven ingredients can bring to a recipe. And you’ll be thanking me for making you try Korean at home!

If you don’t have access to gochujang, substitute with the same amount of Sriracha 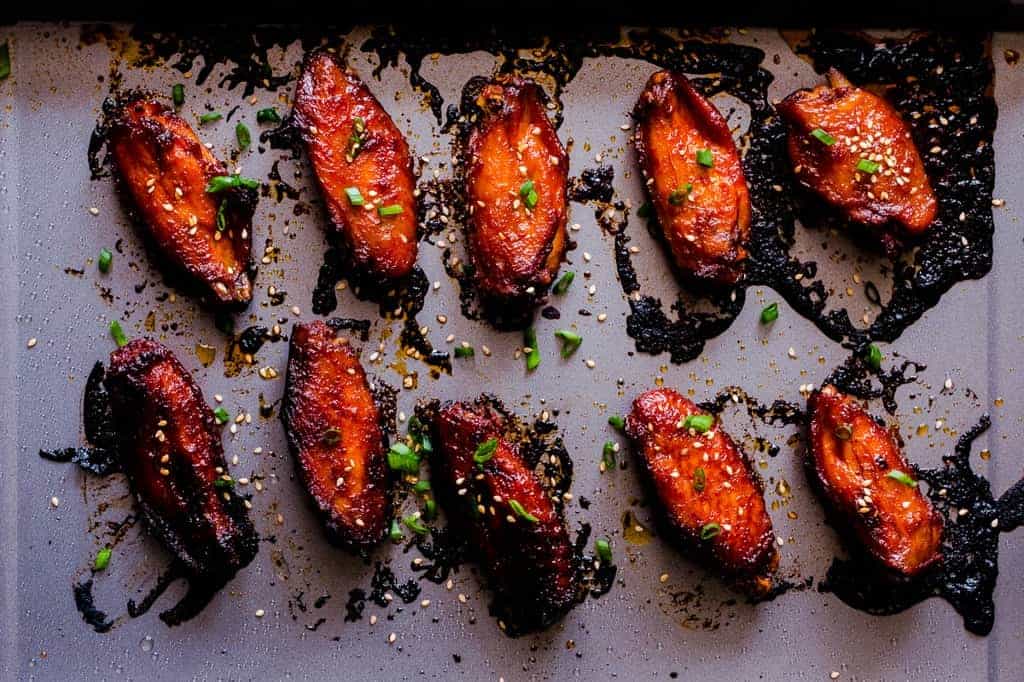 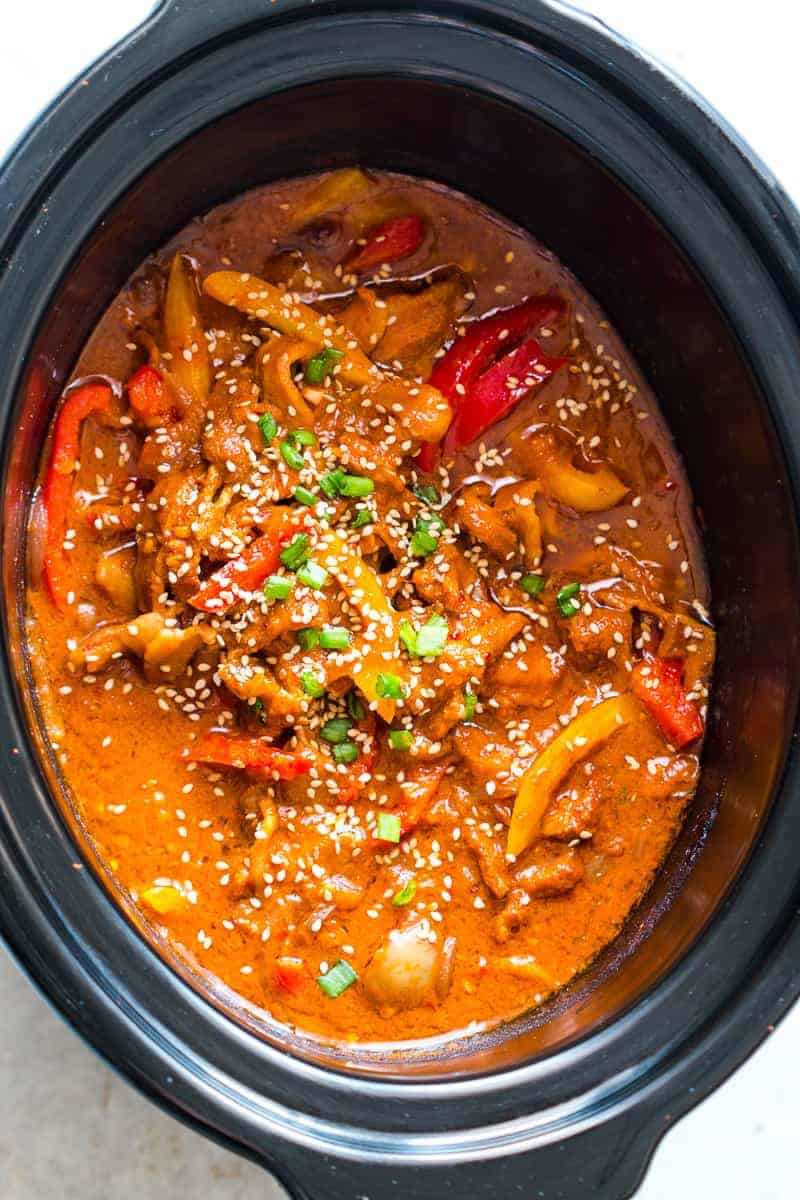