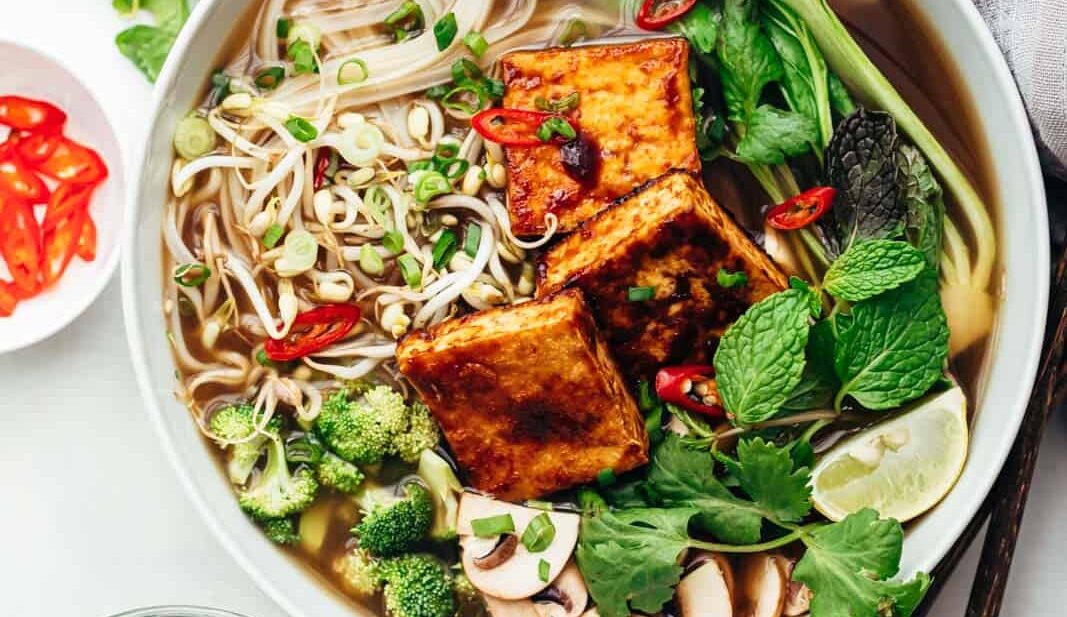 Vietnamese pho is almost always meat based, but this vegetarian pho recipe is a good substitute recipe if you don't eat meat. It has depth of flavor, body in the broth and lots of spicy notes.

I'm not going to claim that this is the most authentic pho recipe out there. Because vietnamese pho soup is essentially meat based, made from beef or pork broth. But guys, if you truly want a vegetarian pho recipe, I'd definitely try this one out.

The base of a pho is always a flavorful broth and we've tried to pack in as much flavor as possible. Its deep, rich with strong, spicy notes that come from aromatics. Its really hard to not like this one!

Add smoky charriness: We were trying to replace the depth of flavor that comes from a meaty broth in this recipe, and after scouring tons of recipes online, we decided to char the onion and ginger before adding it to the broth. The charring process adds flavor and a hint of smokiness, plus it also brings out the intense gingery flavor that you'll taste in the pho

Spices are your friend: We are adding four different spices here - cinnamon, star anise, cloves and coriander seeds. They are added whole and they really make the bulk of the aroma and flavor that you'll smell and taste in the first bite. It's important to use good quality spices here.

Don't overcook the broth: Yes, you heard that right. I've reiterated it with our recipe for homemade vegetable stock before. When making veggie stock or broth, it's important not to cook it for too long. Unlike a meat based stock, which you can leave on the stove to simmer for hours and it gets better with time, the same thing does not happen for a vegetable stock. It starts to lose flavor. 30 minutes of cooking is enough.

Don't skip the toppings: We love toppings! So bring it on. And in this case, topping make it better. So much better. With all the spices, toppings like fresh coriander (cilantro), mint, spring onions, lime etc add freshness to this vegetarian pho soup. We also love adding more veggies like mushrooms, broccoli, and some sauteed tofu. Those are not toppings ideally, but they make this pho crunchy, and turn it into a complete meal!

How to pronounce pho: I didn't know this till a while ago, and I had to share. Pho is actually pronounced as 'fuh' not 'foe'.

How to eat pho: The right way to eat pho is to use both chopsticks (or a fork) and a spoon. Use your chopsticks to mix everything together first and then pick noodles, veggies etc to eat. In between, use your spoon to scoop up your broth and slurp it up!

Seriously, the Vietnamese Pho is one of our favorites year-round soups. It's comforting when its cold out, and so fresh when it's warmer! 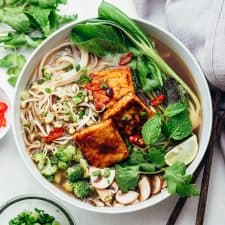