Like they say slow and steady, this one just one the race. This slow cooker Chipotle BBQ Pulled Pork has all the right flavors - smoky, spicy and insanely delicious. Perfect for tacos, burritos with just 5 minutes of prep.

This is officially the BEST pulled pork ever. And we'll have to break up if you disagree.

No really. I'm not the biggest fan of pork and very very picky when I decide to eat pork. It has to be full of flavor. It has to be tender, melt in your mouth and worthy of going into my stomach. This slow cooker chipotle BBQ pulled pork took me about 0.2 seconds to decide. That love is happening right here in my stomach.

In went with the chipotle peppers and a few other ingredients for this slow cooked pulled pork into the blender. And out came the most amazing marinade in exactly 2 minutes. I love the quick and easy way too much. I didn't even sear the pork. I've realized that when things go into the slow cooker, you don't need to sear to lock in the flavors. Slow cooking on it's own is such a great way to build flavors in a dish.

Now before we go full force into the recipe, let's address some questions here. Just so we can all become experts on pulled pork.

What is pulled pork?

It's simply pork that has been cooked long enough for the meat to be easily shredded with a fork. You can braise it in an oven, cook it in a pressure cooker or like we are doing here, cook it in a slow cooker or crockpot for perfectly flavored pulled pork.

The world says it's the pork shoulder or the pork butt because the meat becomes super tender when it's braised or cooked for a long time. So this slow cooker recipe recommends pork shoulder. Bone in can be great, but I personally prefer a boneless cut so that it's just easier later and you don't need to go fishing for the bone.

How long does it take for pulled pork to cook?

If you are using a slow cooker like me, 8-9 hours on low is perfect to cook the pork shoulder. I wouldn't recommend cooking it on high because low and slow is the way to go. If using an oven, braising it for 3-4 hours should be sufficient. I reckon a pressure cooker / instant pot would be the fastest and would cook a big chunk of pork in under 90 minutes.

There that doesn't sound difficult at all!

This is seriously becoming my favorite pork dish, and is topping the Korean Gochujang Pork Bulgogi that we all love so much!

So let's take out the tacos and fill 'em up burritos because this slow cooker chipotle bbq pulled pork just took over the world! 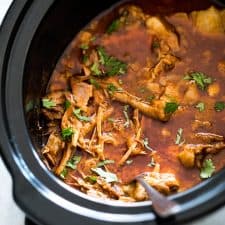 For the Marinade Sauce