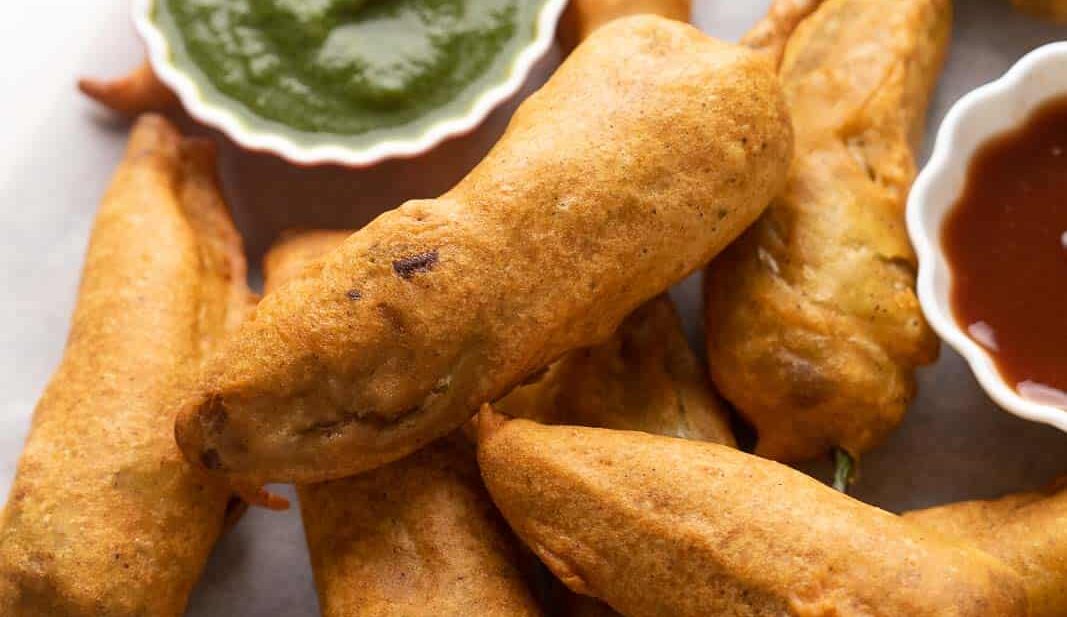 Mirchi Bajji is a fantastic monsoon snack and another addition to the pakora series. I'm showing you how to make them two ways - with a potato (aloo) stuffing and an onion coriander stuffing.

There is nothing like Mirchi Bajji's with a cup of chai! These are India's answer to Jalapeno Poppers and I definitely love these infinitely more. You might be sniffing your way through it but you won't stop eating them. At home, we only sprinkle chaat masala on the inside before batter frying them.

But then I came to Bangalore and realised that there are a few different versions. The popular Mirapakaya bajji/ Milagai bajji from Andhra and Tamil Nadu which are stuffed with potato or onion masala are sooo good. These recipes are inspired by them!

Ingredients + How to make Mirchi Bajjis

These are usually made with large green chillies which are a light green in colour. The large size makes them easier to stuff. These are specifically called 'bajji chillies' when you go buy them and are easily available in most vegetable markets. If you live outside India, you can use jalapenos which have a different flavour but serve the purpose!

Stuffing for Mirchi Bhajiyas: I have recipes here for two different stuffings. One is a potato / aloo filling and the other is a quick onion filling with ajwain and coriander. They are both delicious. You could also leave them plain or just slit them and sprinkle a little chaat masala inside if you don't want to do the extra effort. They still taste pretty amazing.

Batter for Mirchi Bajjis: The batter is very similar to my paneer pakora recipe. It's a simple batter made with besan, rice flour, chaat masala, red chilli powder and salt. The consistency should be thick, dropping consistency so that the batter coats the bhajiyas and doesn't come off. Also, if the batter is too thin, the layer outside the mirchis won't be thick enough and the chillies will actually soak up more oil, and won't cook properly. Watch the video to see the consistency of the batter.

How to slit, deseed, stuff and fry mirchi bajjis: While using these chillies, a slit needs to be made to create an opening for the stuffing. The trick to splitting the mirchis is to make one vertical and one small horizontal slit (watch the video). I like to deseed the chillies or the bhajiyas become too spicy, but if you like the heat, feel free to leave them in. Make sure to wear gloves while handling these and definitely don't touch your face after. Don't be stupid brave like me 😂

These chilli pakoras are super addictive! I literally make them every second week, and while a lot of people like these with coriander chutney, I prefer these with tomato ketchup to help with the heat 🔥 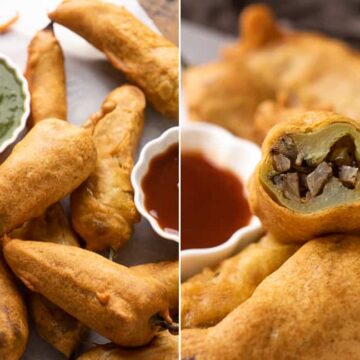