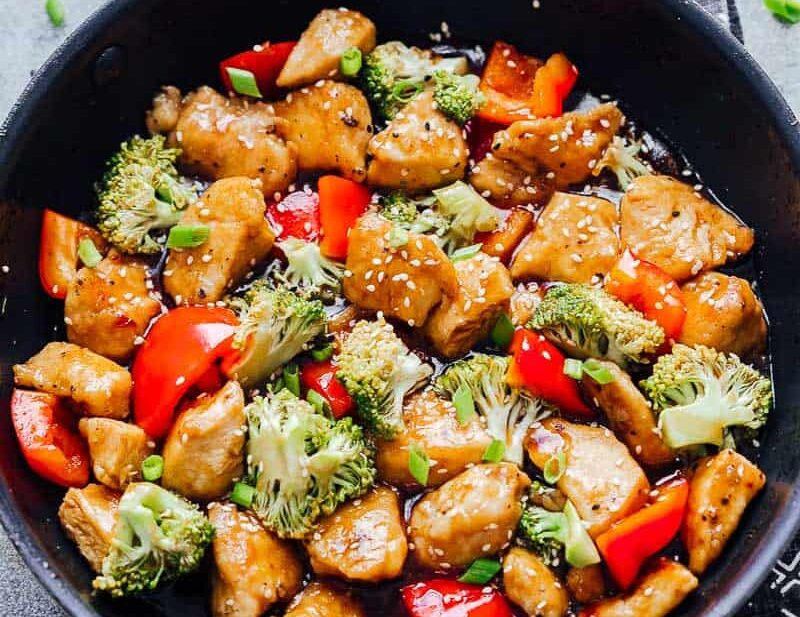 Easy Teriyaki Chicken with Broccoli combines the love of a good teriyaki chicken with broccoli and bell peppers to create a dish that everyone loves! Made with ingredients that are really easy to hunt down, this recipe is a really comforting one to turn to on a week night for dinner! 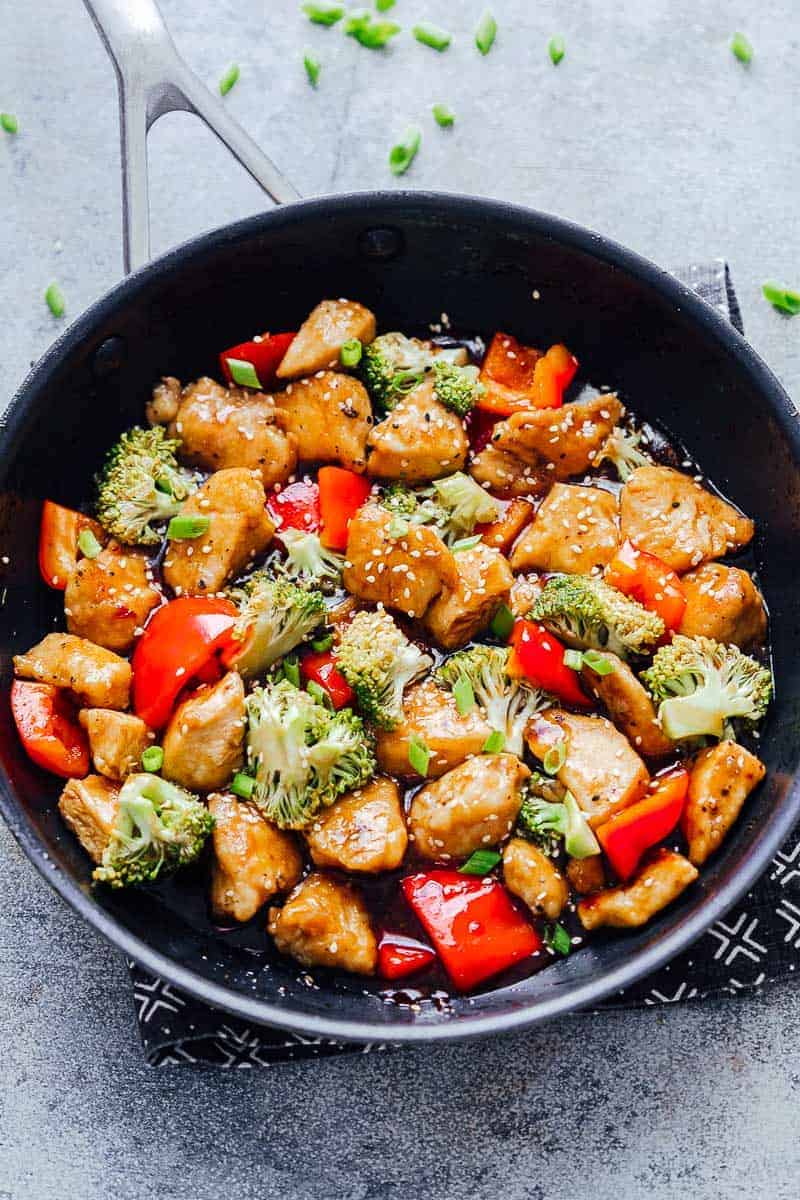 This is not the first time teriyaki anything is making an appearance on the blog. Clearly, I love the flavor because I have some teriyaki chicken meal prep inspiration, teriyaki meatballs made in a slow cooker and a teriyaki shrimp. With this teriyaki chicken, obsession levels are hitting the ceiling!

This time I’ve been testing this recipe to add a little crispness to the chicken before its tossed in sauce. The thing is teriyaki chicken is originally a Japanese recipe where skin-on, boneless chicken thighs are cooked skin down in a hot pan without any oil. The fat renders in the pan from the skin and the result is super crispy skin and a juicy piece of chicken that’s absolutely incredible!! The sauce is poured on top or used to dip instead of everything stir fried together like this. An authentic teriyaki sauce uses soy sauce, sake, mirin and sugar where everything is combined in a sauce pan and simmered till thick. My problem is I don’t have two of those four ingredients and probably never will because I don’t make Japanese food so much at home, plus they are hard to find.

So I dumb the recipe down to find a flavor that’s more like takeout teriyaki chicken, but better. Because let’s be real. Its yum! 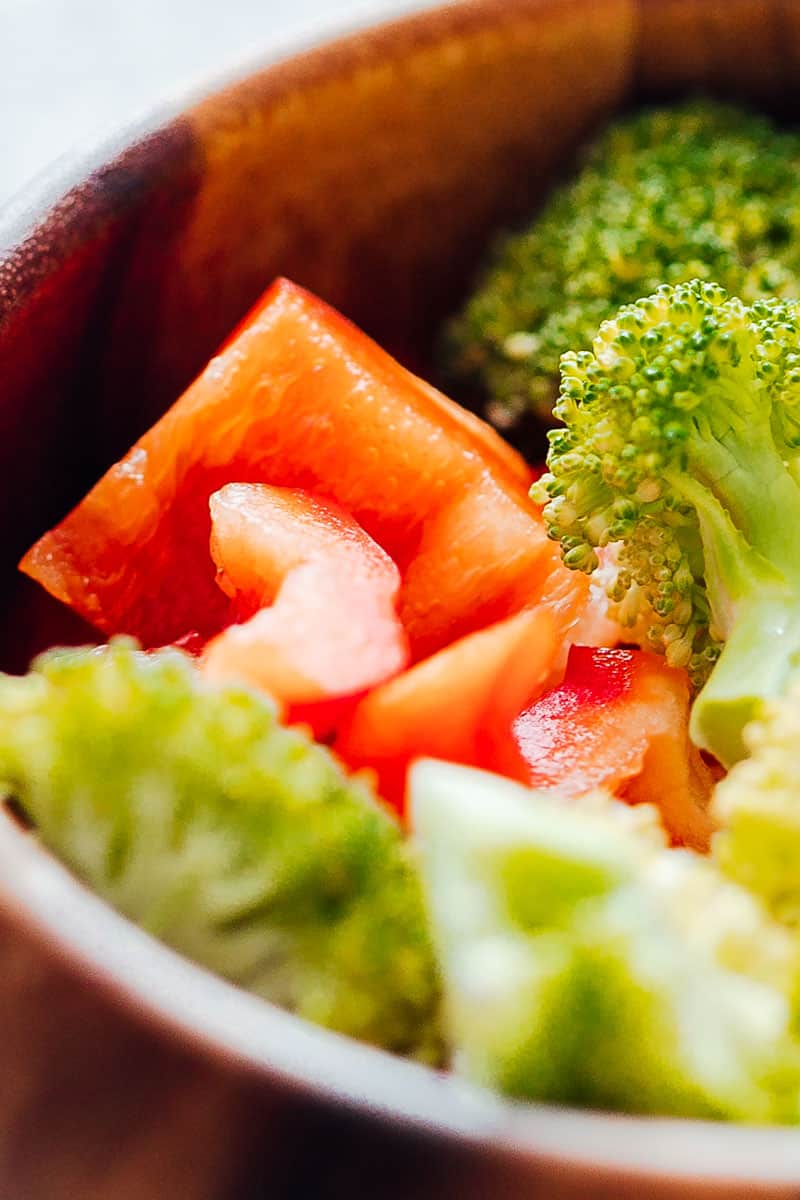 I love adding veggies to this recipe. They add so much color and flavor too. Broccoli and red bell peppers are two of my favorite stir fry veggies because they don’t water down completely, still remain crunchy and hold their shape if you use them right.

Unlike the japanese teriyaki chicken, the sauce for this recipe is made up of very simple ingredients.

The teriyaki chicken sauce is made up of soy sauce, rice vinegar, toasted sesame oil, sugar and ginger. Cornflour or cornstarch is used to thicken the sauce. The sauce thickens as it cooks in the pan and you toss the chicken right in the end so that it retains its crispness.

Breasts vs. Thighs for Teriyaki Chicken

Chicken thighs work best for teriyaki chicken because they don’t dry out even when you re-heat the chicken and remain juicy. However, if you prefer breasts, go ahead and use those. They are fantastic if you are eating this as soon as you make it, but they can get a little tough when you reheat the recipe. 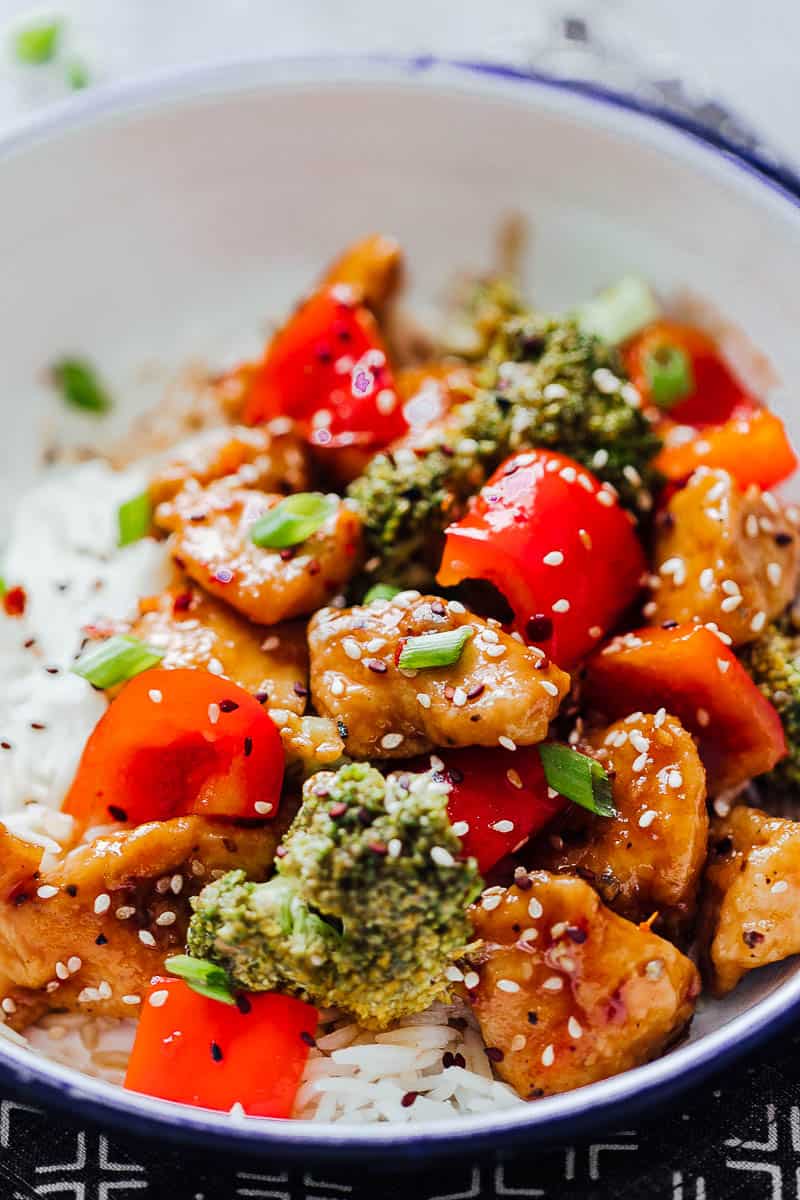 That chicken 😍See how it shines when tossed in the sauce? I hope you love this recipe as much as I do!

This Teriyaki Chicken Stir Fry is made with a sweet, sticky teriyaki sauce that’s easier than you think! The teriyaki sauce combines soy sauce, rice vinegar, sugar, sesame oil and cornstarch for thickening. Use chicken breast or thighs, and add some broccoli and bell peppers. Ready in under 30 minutes and just like takeout!

Toss the chicken with soy sauce and garlic and set aside for 10 minutes.

Heat two tablespoons oil in a pan. While the oil is heating, coat the chicken with cornflour (mentioned under marinade), and place the chicken in a single layer on the pan. Cook on medium high heat for two minutes, and then flip the chicken pieces to cook them for two more minutes on the other side. Once the chicken is cooked, remove it on a plate.

In a bowl whisk together soy sauce, vinegar, sesame oil, sugar, ginger, water and cornflour (or cornstarch) and add it to the same pan. Cook for 3-4 minutes till the sauce thickens. Add the broccoli and bell peppers and cover and cook for a minute. The veggies will steam in the sauce. Add the chicken back to the pan, toss in the sauce and turn off the heat. Sprinkle sesame seeds and green onions on top and serve immediately.

Note 1: Use 4 skinless chicken breasts instead of chicken thighs.

Note 2: Cornstarch and cornflour are essentially the same thing, and they are used to thicken sauces. You can use either for this recipe, or use potato starch.

Pin2K
Share8
Flip
2K Shares
* This post may contain affiliate links.
Previous Post: « Dal Makhani – The Ultimate Recipe for Stovetop and Pressure Cooker
Next Post: Indian Raita – How to make it and its many variations! »